The John Deere X500 only offers reflectors on the back of the tractor, making it dangerous to work near roadways when visibility is poor, as is often required in rural areas during heavy snow. This post will walk through step-by-step instructions on installing flashing LED warning lights.
Home Non-Technology Adding LED Flashing Warning Lights to John Deere X500 Tractor
0  
By Josh Moulin Non-Technology April 18, 2022

I have written here and here about installed LED headlights on my 44″ snowblower and rear-facing LED lights on my John Deere X500. After seeing the success of these lights and realizing how difficult it was to see my John Deere from the back at night, I decided to add LED warning lights to my tractor. After experiencing a nor’easter that dumped 38″ of snow in less than 24 hours and having to run my snowblower throughout the night, I realized it was dangerous for me to be by the road at night without any warning lights. I also wanted to have the ability to operate on the roadway in the event there was an emergency on our road and a county snow plow had not been by yet – or one of my neighbors needed help getting their driveway cleared.

After spending 18 years in public safety and installing my fair share of emergency lights and sirens, I knew that low-profile LED lights were available that would draw little power and provide plenty of warning for drivers. After looking around on Amazon, I found a great set of low profile amber/white LED lights that I mounted on the rear of my tractor, on top of the rear reflectors. I selected this location because there were already holes in the frame of the tractor and it seemed to be a perfect location to add these warning lights.

This post details how I added two LED surface mounted lights to the rear of my John Deere X500.

This post will probably help with a variety of John Deere tractors, but in case details are needed, here is what I was working with:

Note – I do not receive any type of benefit if you buy these items and this is my unbiased review of the equipment I purchased.

Unpackage all of the equipment and get it ready. Each LED light comes with hardware for mounting and several feet of wiring. The good news is that the lights I purchased from Amazon will reach from the rear of the tractor to the front and have some wiring left over, so it makes for an easy wiring job. 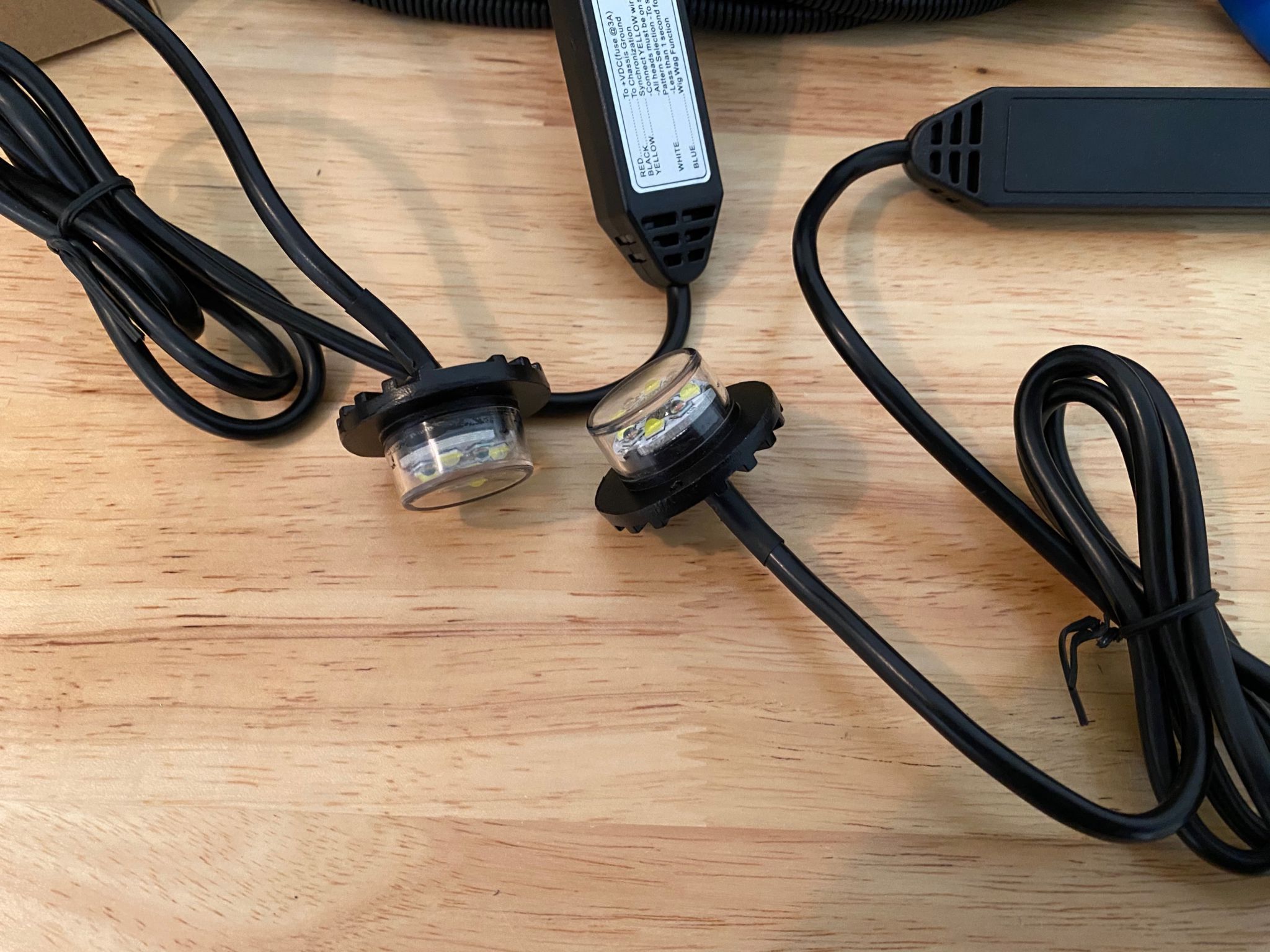 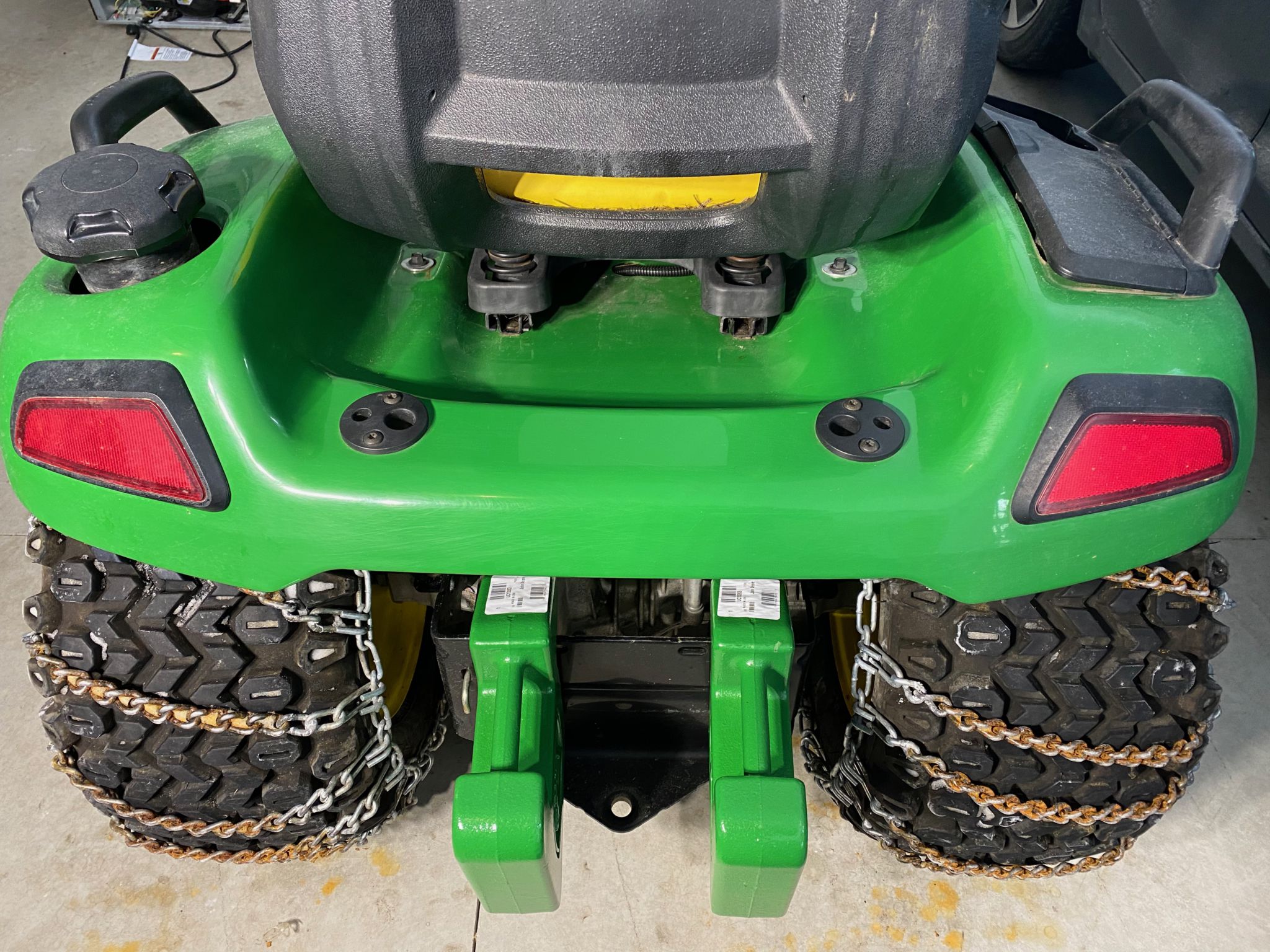 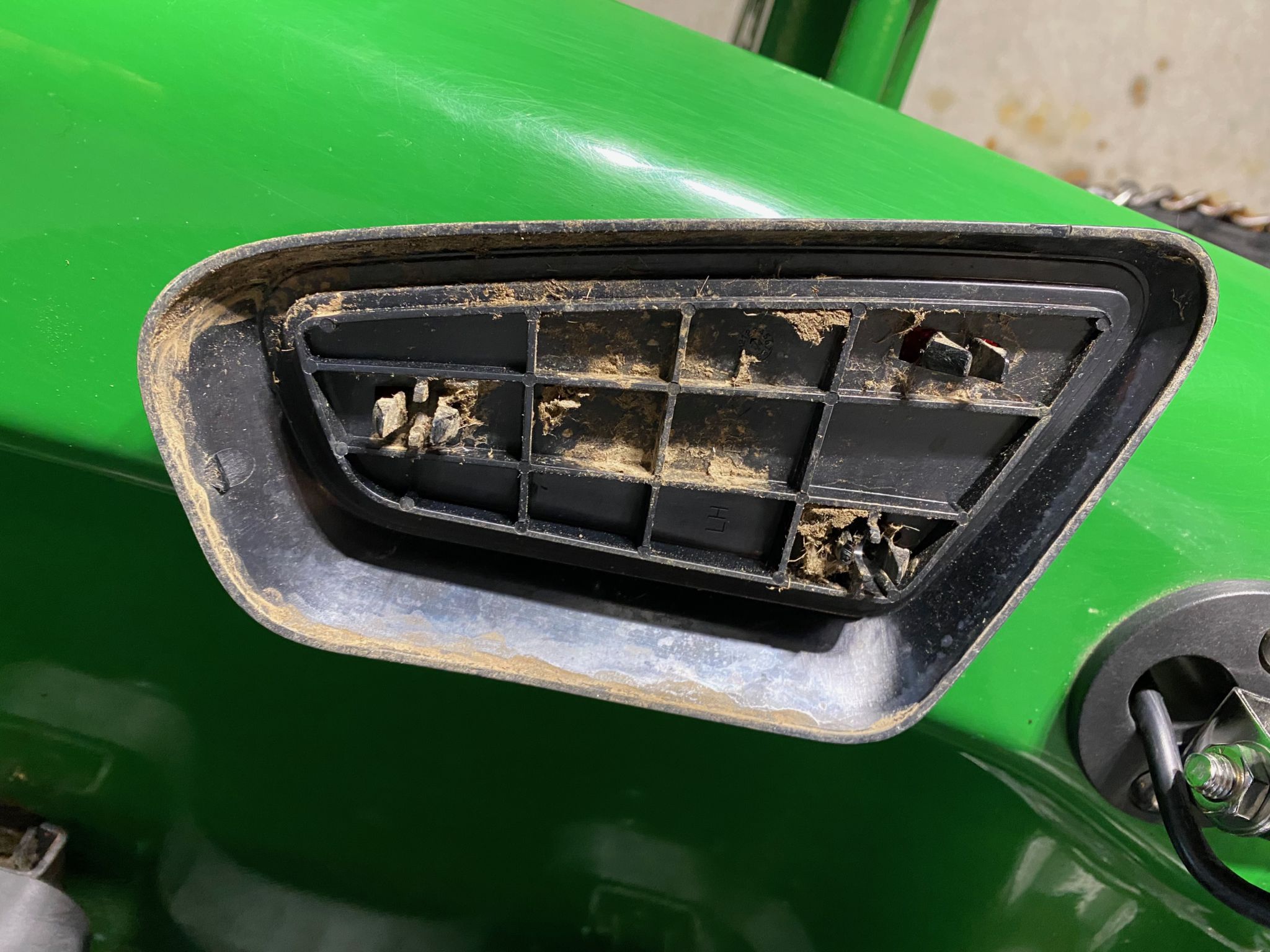 With the reflectors off of the tractor, the next step is to cut the hole in the reflector for the lights. To do this, I traced the light perimeter on the back of the reflector with a sharpie and then used a pair of wire cutters to clip off the plastic molding in order to have a smooth surface (pictures below).

Once I had traced the lights on both reflectors and clipped the plastic flanges, I drilled a 5/32″ pilot hole through the center of the circle I had traced.

With the pilot holes completed on both reflectors, I then used a 1-1/8″ hole saw to make the holes for the LED lights to be mounted. 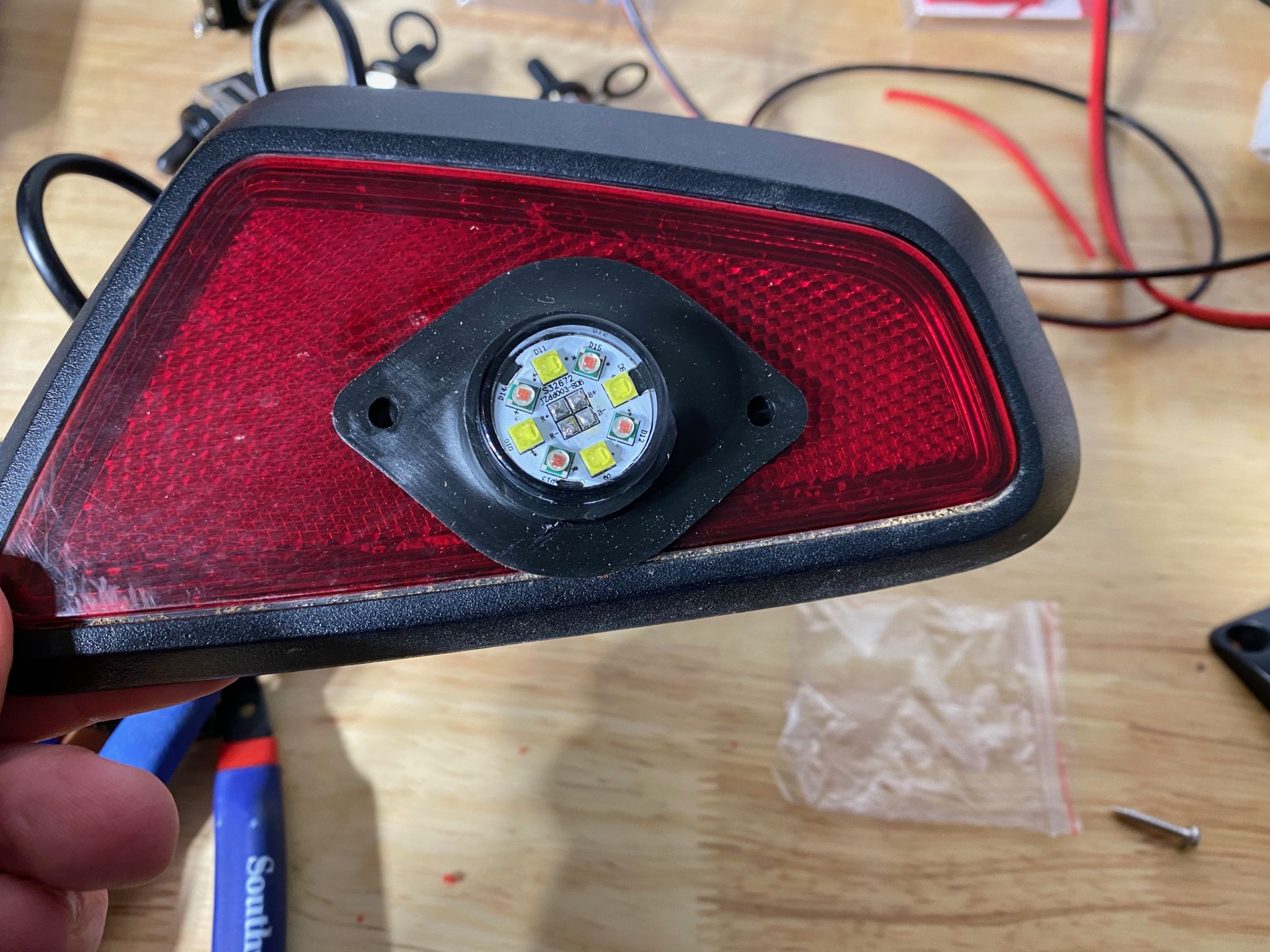 After placing the plastic flange on top of the gasket, screw in the two screws to secure the light to the reflector. Below is an image of the mounted LED from the back side of the reflector. Also note that the screws are a bit too long and they will hit the body of the tractor, preventing the reflector from snapping back in place. I used a pair of wire cutters to cut the ends of the screws off and then the reflector snapped right on. 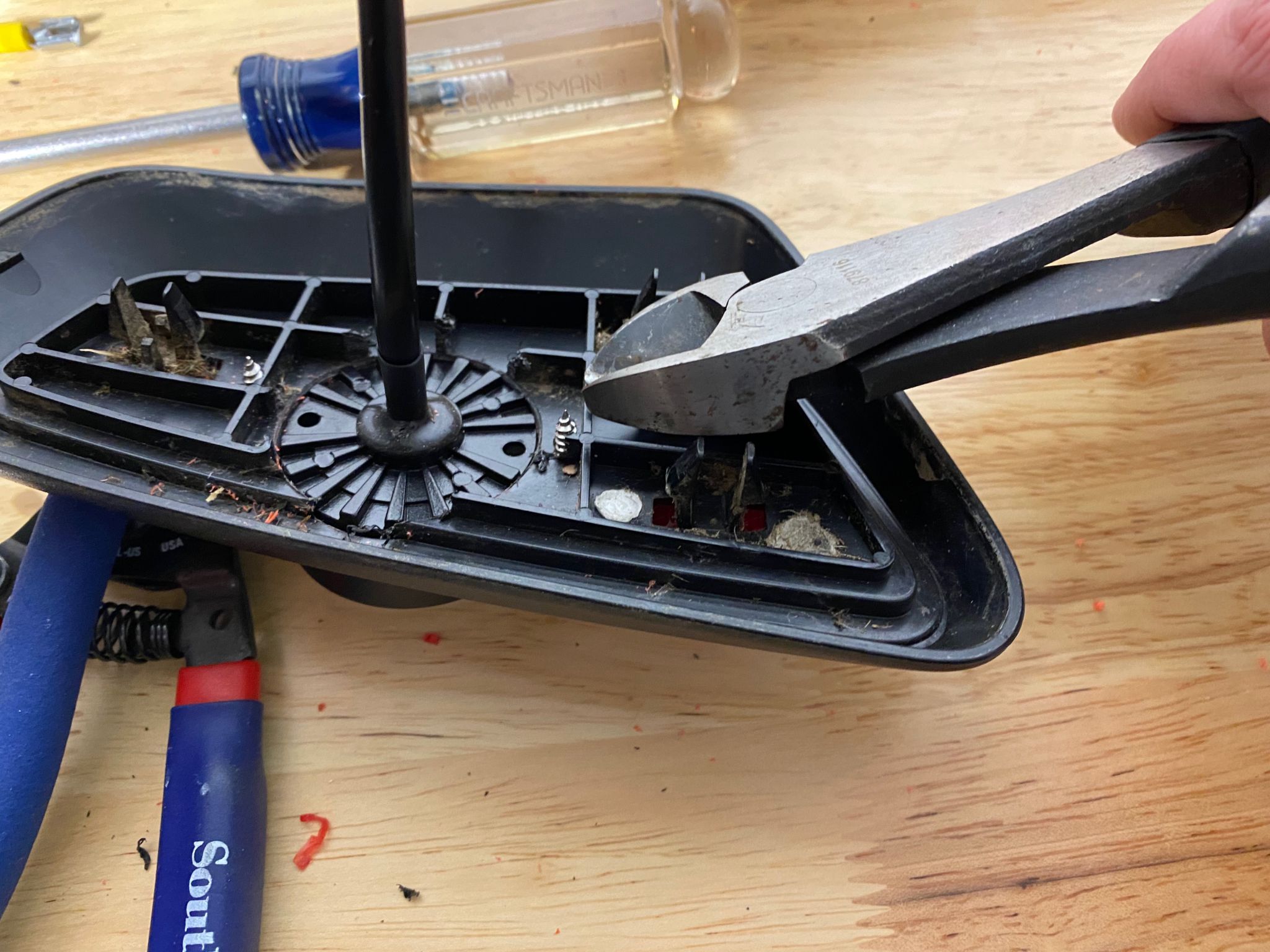 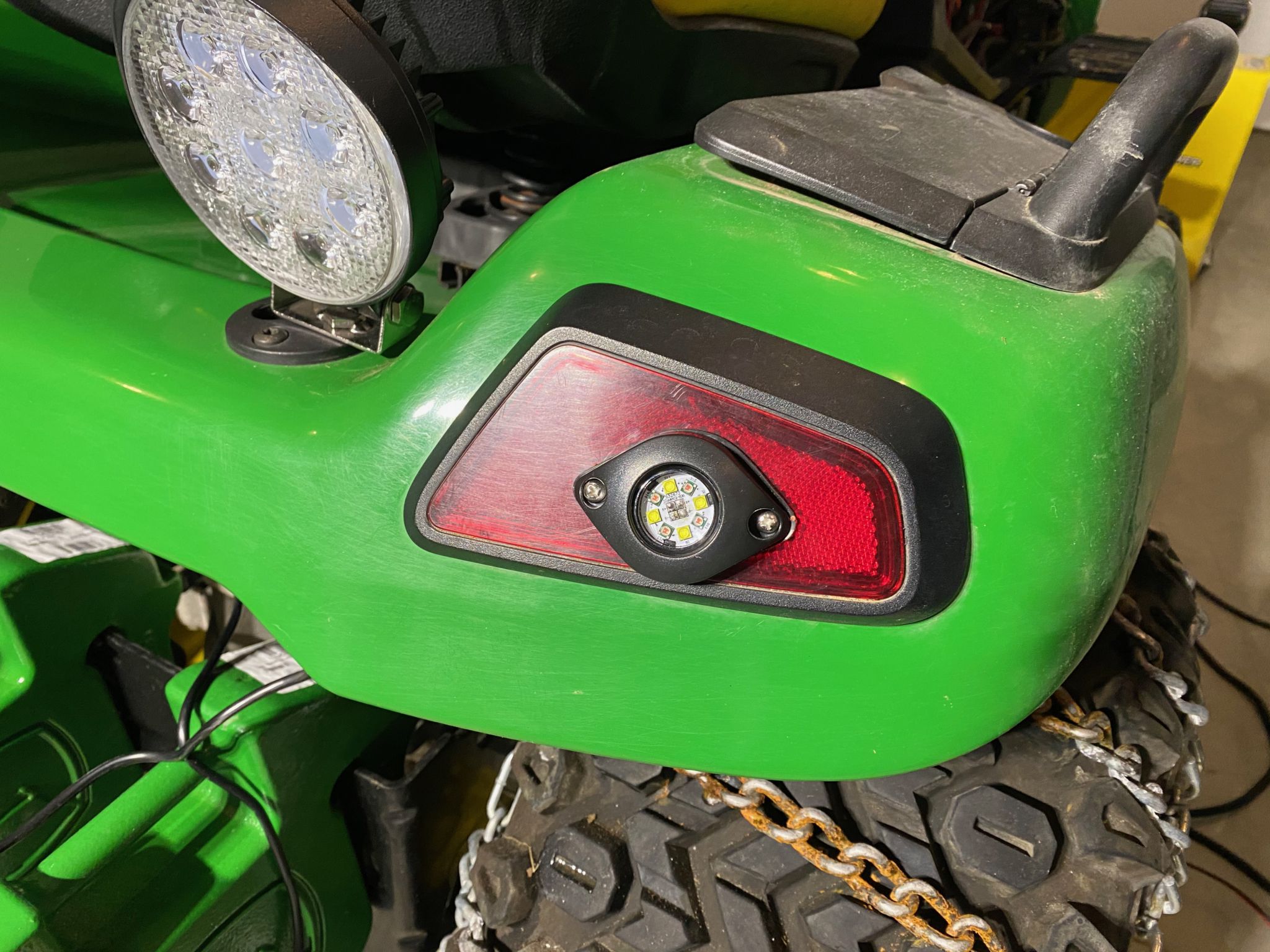 If you read my blog post on mounting white LED work lights to the back of the John Deere, the next few steps will be very similar.  Each of these LED lights have a square flasher as part of the wiring, but even with this box, I could still easily route the wiring from the rear of the tractor to the front. I chose to route the wiring along the right side of the tractor and zip tied these wires to themselves and other wires to ensure they stay out of the way of tires, pedals, and other moving parts. I routed these wires in the same manner as described in the post about the rear work lights, so check that post out if you want some pictures and further information.

The LED lights have several small wires associated with them. Once the wiring harnesses from the rear of the tractor make it to the hood area, they will need to be trimmed. There is a wiring diagram included with the LED lights and I have also included here how I wired the lights:

Here is what it looked like when I had them completed. 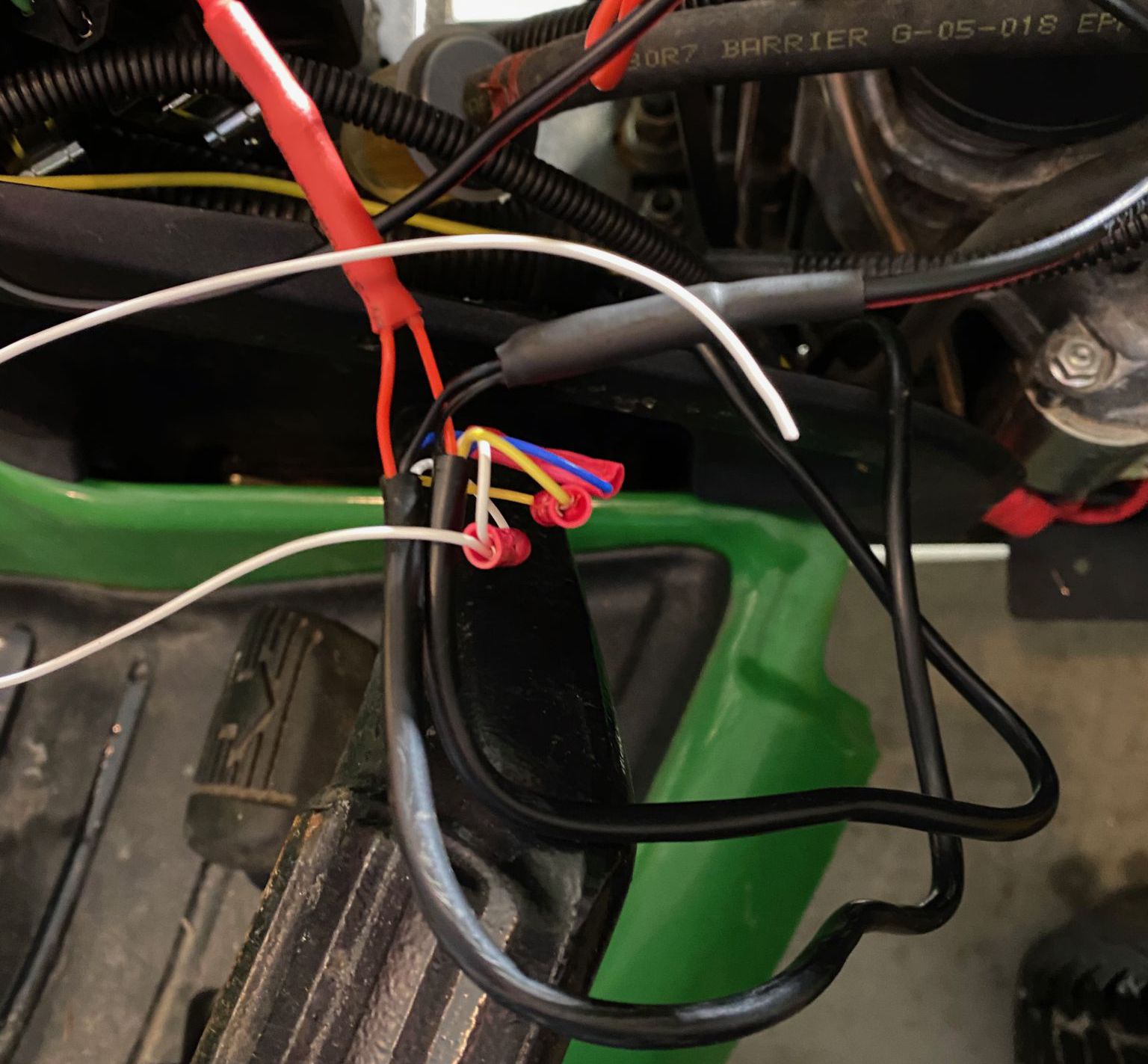 Notice in the above picture, I used heat shrink tubing on the black and red wires. I also used yellow butt connectors for these, which was a good size for the two small LED wires to go in on one side and the larger wire I added to connect to the other side. The heat shrink tubing not only looks cleaner, but it also helps prevent the wires from ever pulling out.

At this point, the red and black wires can be touched to the positive and negative posts of the John Deere battery just to make sure the lights turn on. If the lights start flashing, there are just a few steps left to wrap this project up.

The white wire I discussed early that allows for the light patterns to change can be shown below. I simply used a zip tie to secure the wire with the butt connector near the battery. A red arrow can be seen pointing to the butt connector. 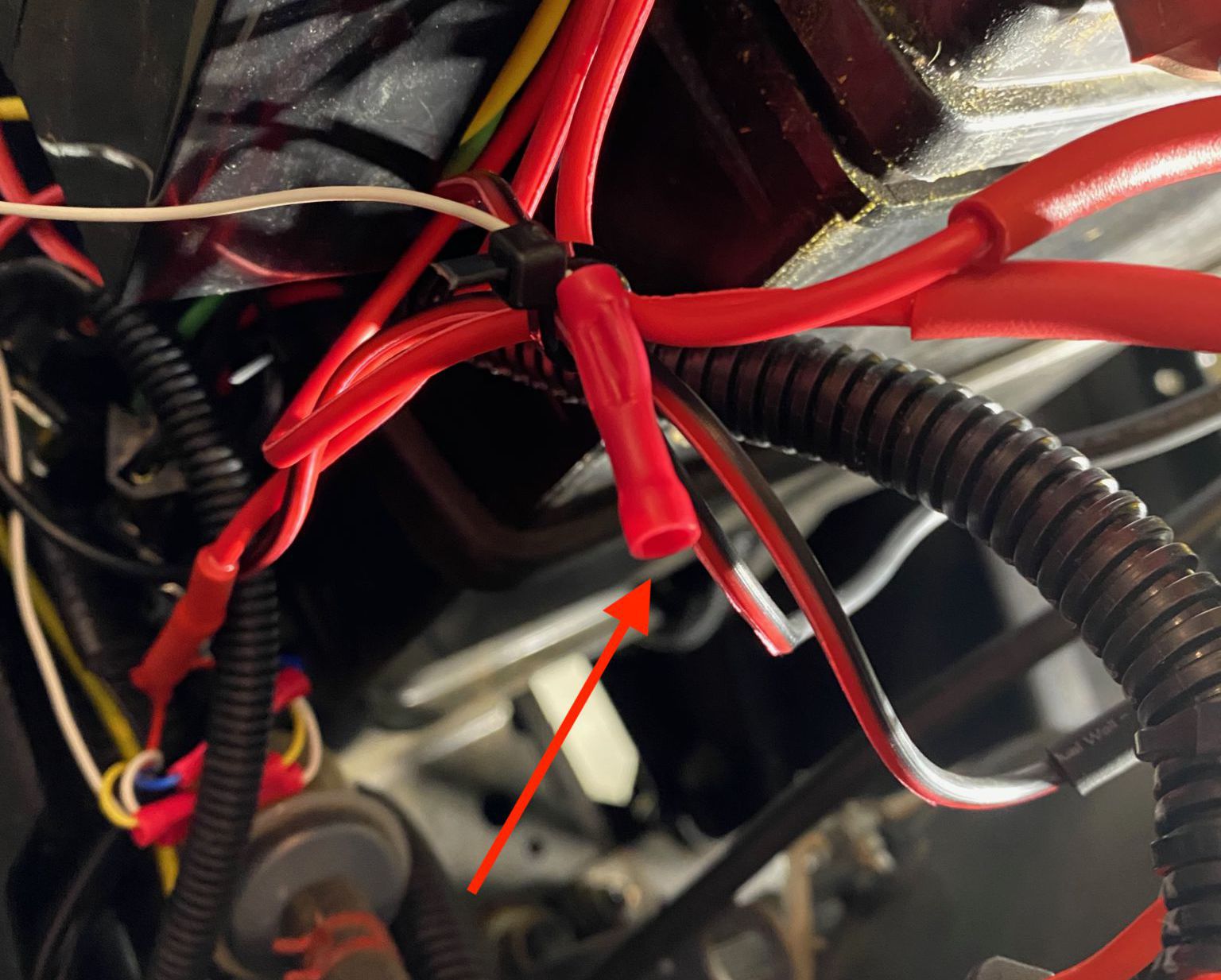 The next step is to install the switch. Like in the previous post about installing rear work lights, I selected a spot on my dash that I could easily fit a switch. It happens to be directly next to the switch I installed for the rear work lights. I started by drilling a small pilot hole in the dash at the center location of where I wanted the switch, then used a 1/2″ drill bit to create the hole for my switch. I used the same waterproof switch as before. Pictures of the switch and hole in my dash are shown below. 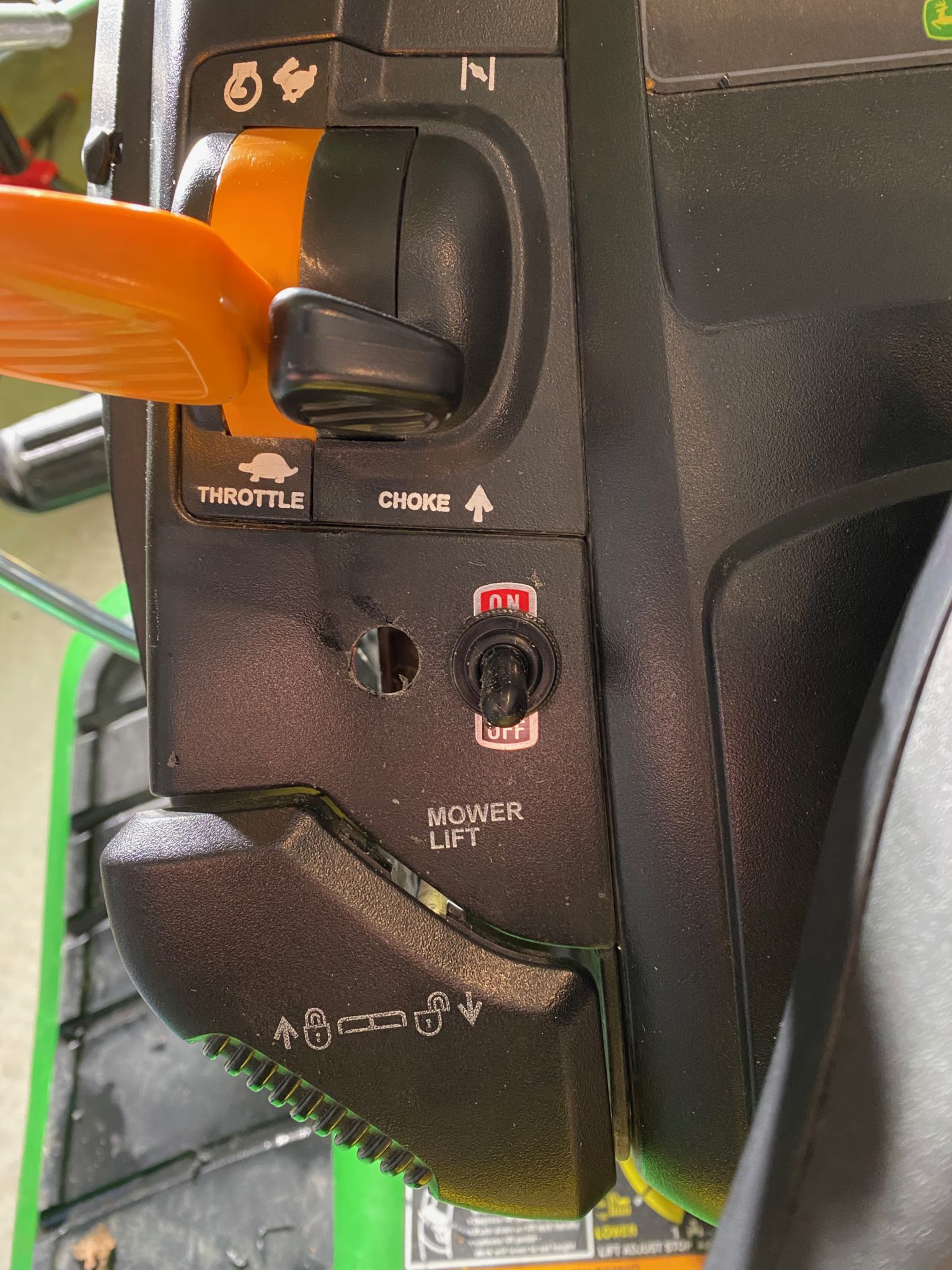 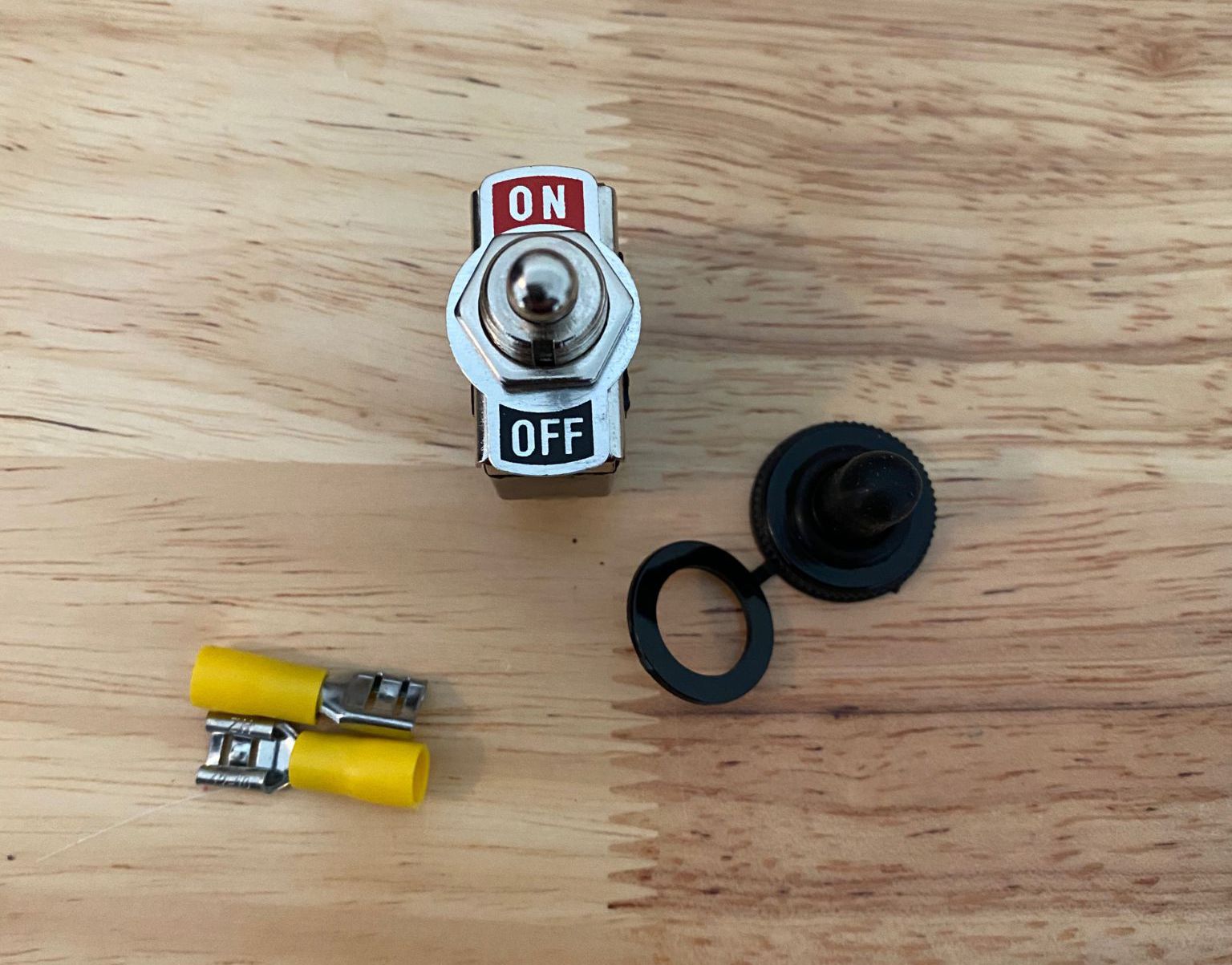 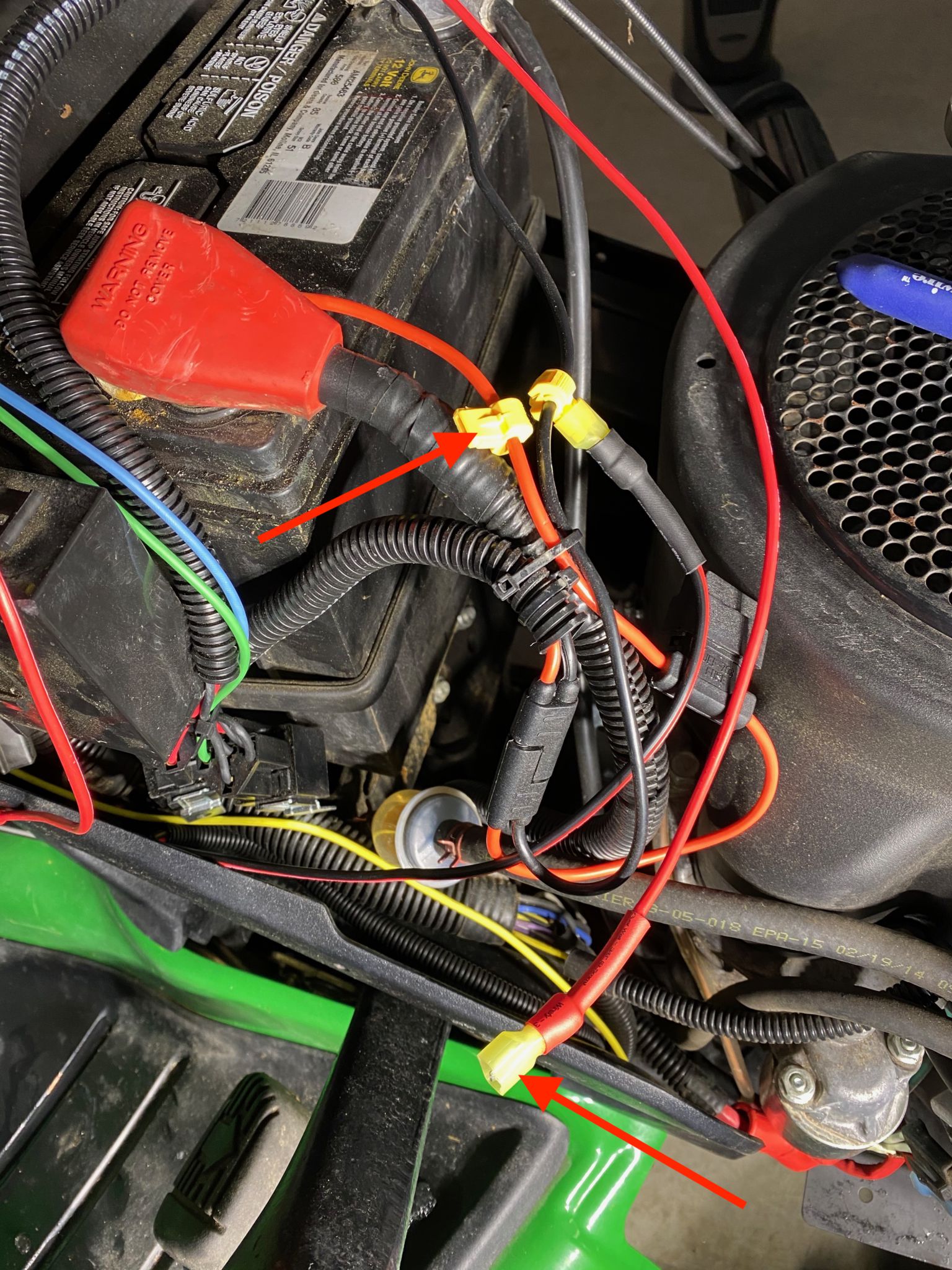 The finished switch is shown below after being installed in the dash. 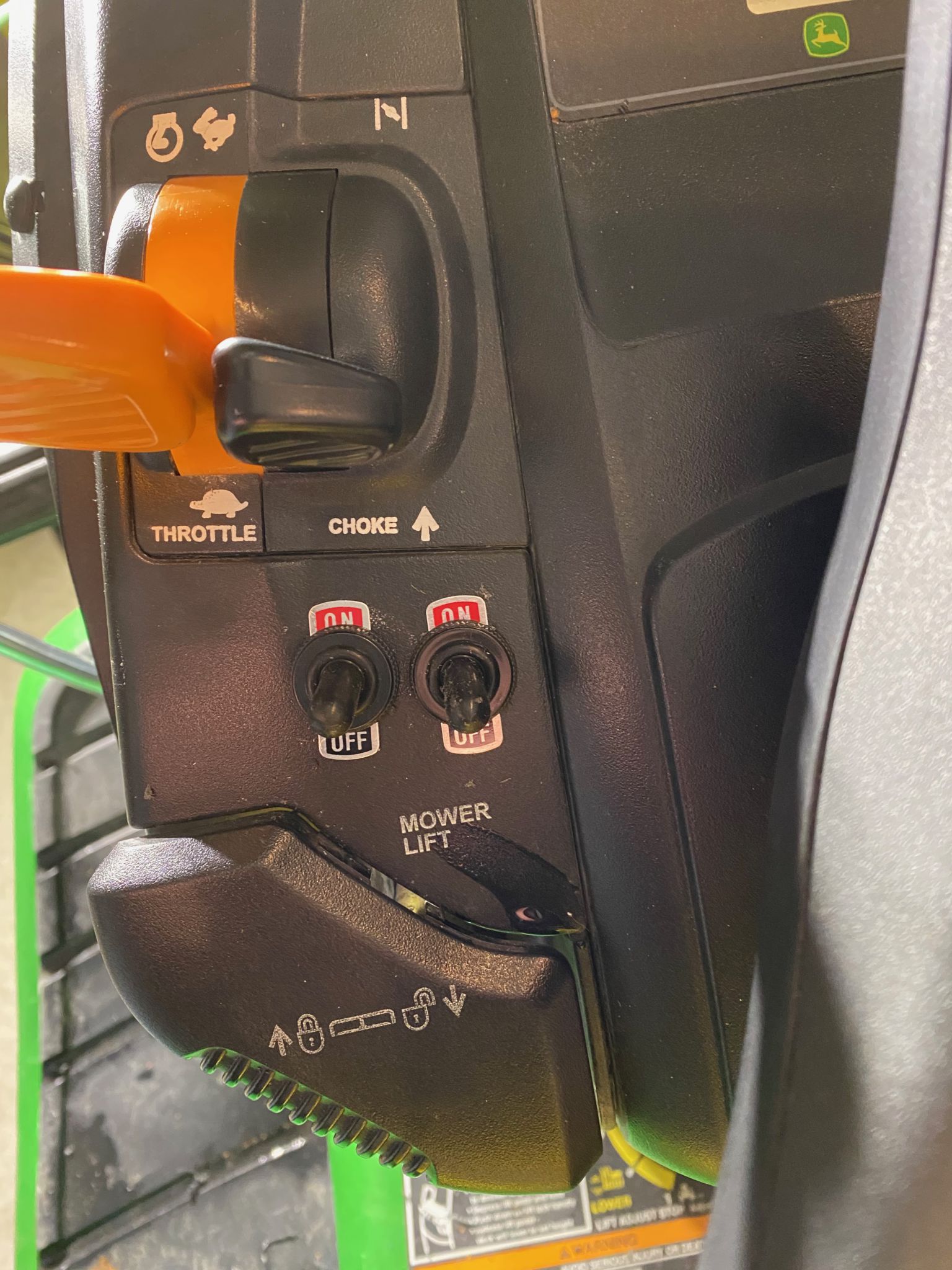 Below is a picture under the dash of my John Deere, showing the two switches I have installed (one for this project and one for the rear work LED lights) and how I organized the wires with zip ties. 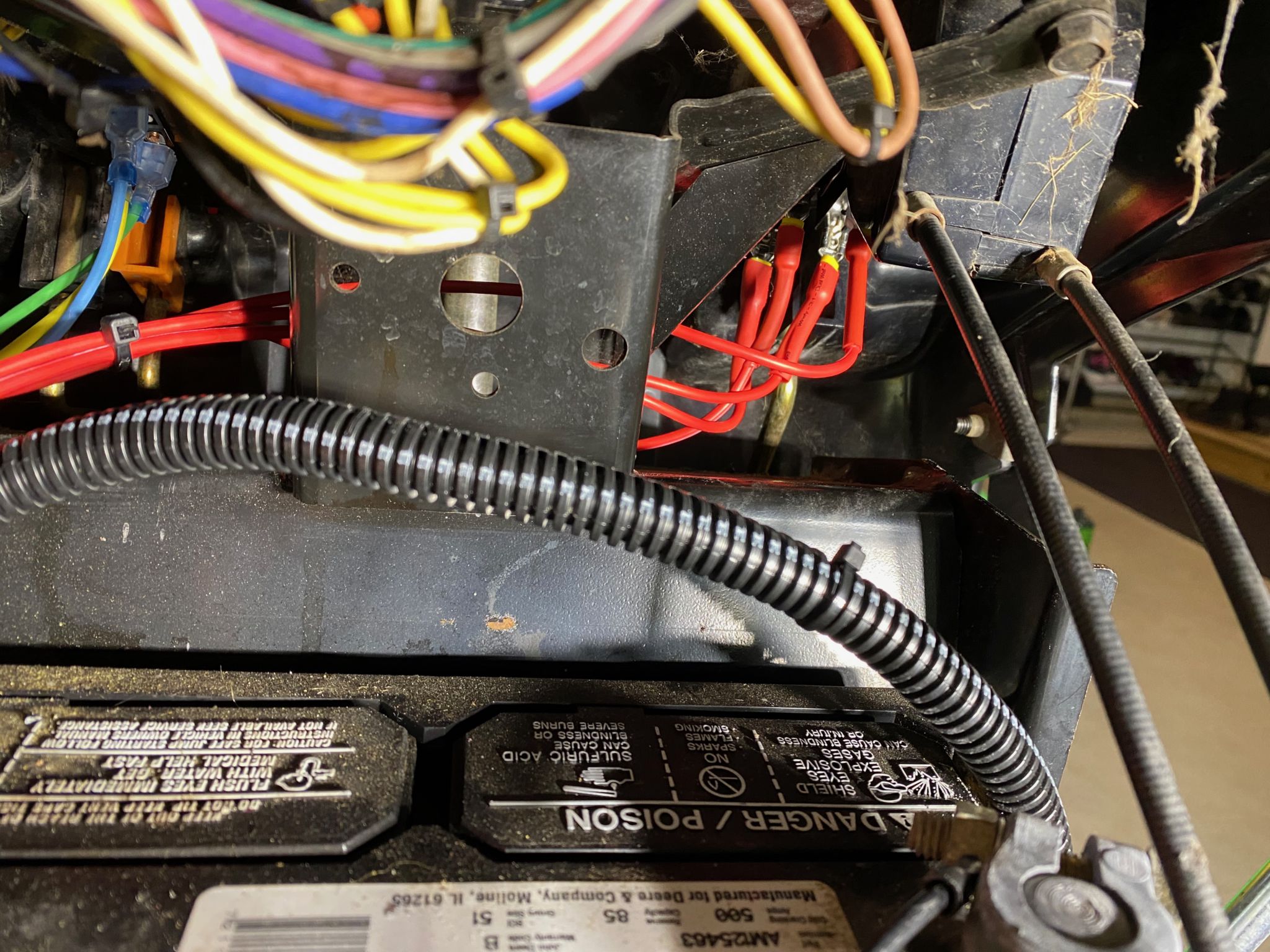 Finally, I made sure all of the wiring was out of the way and zip tied to keep things clean. A video is posted below of the lights in action. 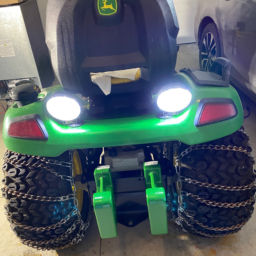 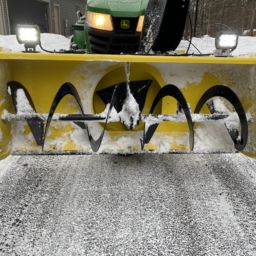